THS, I like your third option too. Locke has had an amazing journey before coming to the island. I would think the only characters that even come close to his journey would be Jack, Kate, or Sawyer. But, I will leave that up to Hope if this is the topic she picks.

TheHolyStickman wrote:Ok since the challenging is going a bit slow, I'll propose a challenge.

I hate to throw the polar bear wrench into this but those topics won't really work very well in a debate format.

I love the idea of discussion/voting on which is the best flashback or season or episode but keep in mind: it has the word BEST in it.
This is opinion, not fact.

How do you debate an opinion or feeling?
I already know my favorite episode, character etc. and no amount of argument is going to sway that opinion

If you could, my screen name would be MyStarbuckLovesLost

Debates have to deal with tangible facts and observations (even if they are lighthearted subjects) or else they are not debates, they are opinion polls. 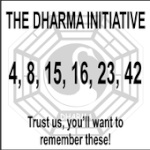 MSHL, as I said in my the last debate you should vote for the person who argued their case the best. Walkabout might be your favourite episode but my argument for it may be terrible. And Hope may argue whatever episode very well. So then your fav episode would still be Walkabout but you vote for Hope.

Also why I liked the third one was that not many people think about the flashbacks as much as their fav episodes or seasons. So some people might not have made their minds up about it yet.

Somebody stop me I'm debating already!

Gosh guys, right now my computer is on the fritz big time. So if you guys don't want to wait for me I understand. This isn't my computer that I am on right now but a friends. So if SunnyP wants to pick a topic to debate I understand. I feel bad is all and since she was my last challenger I will let her pick a topic to debate. I am totally sorry guys!! I should be another week if you want to wait though!! 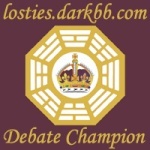 Hope, It would be completely unfair to do a debate without the reigning champ in it. Its not like were rushing them. Im sure everyone can wait at least a week for you. We have to space them out anyway its not like lost is on anytime soon!

I dont mind waiting a week

Topic: All things considered, will Ben's ultimate goal (his endgame) be for good or for evil?

Or put in a a debate format:

Resolved: Ben's ultimate end will be a just and virtuous end.

Ok...so we don't know what his end is. That's what I like about this though.

Each Debater gets to convince us of Ben's real end, and then gets to argue whether or not it's a moral end (which may or may not be self-evident). Then, each one can attack the other for (i) the formulation of the end, and/or (ii) the justification/attack of that end.

Indeed. I think this goes back to my nerdy LD days (Lincoln-Douglas debate) in high school.

I want a debate with some teeth!!!!

I need to get around to the big theories section....I'm sure there is a brilliant theory laying out the basic framework of Lost just waiting to blossom in my head...all I need to do is organize my random insights in some sensible and compelling way. Of course, I have been thinking this for 4 seasons now, but c'est la vie, I have to keep the faith I guess.

BTW...I like the Pink Floyd shout out you got there.

Thanks, I think I might change it soon. Any suggestions?

"When in the course of human events, it becomes necessary for one people to dissolve the political bands ..."

Oh sorry. Didn't mean to put salt in that wound.

To be honest, I think each person has to choose their own quotes carefully. Therefore, I politely recuse myself. Ok ... I'm not that serious about it, but there is just so much to choose from. I think I best leave it up to you. Unless of course, you just stumbled on the next debate topic.

Resolved: THS should change his quote.

Either way, the good news is now you have me thinking about getting my own quote, and I already have an idea!!!!!

Trial post --- trying to see if my quote comes up.

Got the quote. Stitch hooked it up.

Igs wrote:Resolved: Ben's ultimate end will be a just and virtuous end.

Question IGS,
How does one define "just and Virtuous?" Good and virtuous for whom? Need a more concrete question like "Will Ben's ultimate goal end in the death of the Losties? or something like that

Ok, since we have time, I will throw out a debate challenge.

1) Is Sun right to blame Jack for Jin's death (assuming he is the other person she blames besides her dad). I would say no.

Sorry Guys, count me out of this debate. I'm on holiday from tomorrow for a week.

Well, enjoy your holiday. Where are you going?

Lanzarotti (sp?) in the canary islands. I've tried to learn a bit of Spanish for the trip (Haven't I Nino,

) but I'll still get lost probably. It's supposed to be boiling down there though, and the hottest place I've ever been is Italy in June, so I don't know if I'll survive a week there.

And after that I can enjoy 4 more weeks of no-school. Hopefully I can get through four seasons of lost!

Make that "Lanzarote", thank you very much

TheHolyStickman wrote:I've tried to learn a bit of Spanish for the trip (Haven't I Nino,

) but I'll still get lost probably.

Dude, it's not as if you were boarding an Oceanic flight... you aren't, right?

TheHolyStickman wrote:It's supposed to be boiling down there though, and the hottest place I've ever been is Italy in June, so I don't know if I'll survive a week there.

Dude, boiling? Sure not. Always spring in the Canary Islands...

I'm not used to the hot weather though, Occam. As I said beforee the hottest place I've ever been is Italy.

Remember that HSM is a fellow Brit and we have forgotten what "hot" means....we had about 20 degrees over the last couple of days which is the first sniff of summer we have seen yet

Okay, is this going to turn into a hottest place contest?
I'm going to New Orleans for a week on August 8th. it has been in the upper 90's-F (mid 30's-C) all week here where I live and I'm going to a place that is hotter and more humid...what was I thinking.
But what a city.
The food
the art
the sweat

MyStarbuckHatesLost wrote:Okay, is this going to turn into a hottest place contest?
I'm going to New Orleans for a week on August 8th. it has been in the upper 90's-F (mid 30's-C) all week here where I live and I'm going to a place that is hotter and more humid...what was I thinking.
But what a city.
The food
the art
the sweat 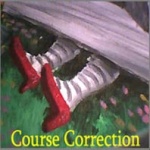 I already have my holiday song. It'd be perfect to walk down a busy street on a hot day. San Tropez - Pink Floyd.

TheHolyStickman wrote:I already have my holiday song. It'd be perfect to walk down a busy street on a hot day. San Tropez - Pink Floyd.

Similar topics
» I was thinking...
» Find 815… get out your calendar and start looking.
» Anyone ever had an abcess? How does it start? TMI ALERT!!